So, me and the group all completed our first 'War and Peace' interpretations, and I should start by saying that I was really impressed with the work that Kris and Jord produced; they both came at the piece from an angle that I could never have thought of and both produced beautiful work. Looks like we chose a good, versatile piece: off to a good start!
Anyway then came the next stage; producing an interpretations of another member's interpretation; or to put it more simply creating your response to their response. We decided to exchange work like so: 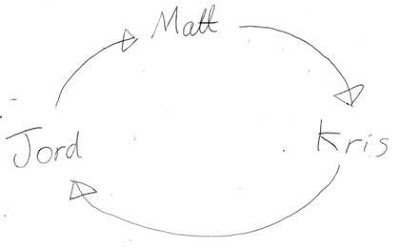 So, it was my job to produce a piece of work based on Jord's interpretation. By the way, in case you haven't seen Jord's first interpretation here it is: 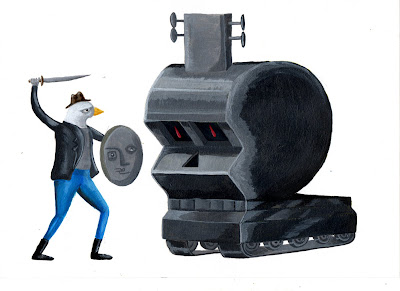 I really liked this piece, as usual Jordan's painting was fantastic and I thought Jord had chosen a really creative and inventive way to portray war, as something mechanical, cold and intimidating.
What first struck me about the piece was the scale; in my response I had kept 'war' and 'peace' the same size, but here it looked as though 'war' was the over-bearing bully and that 'peace' was the brave, plucky underdog. It reminded me of this famous photograph of a protester at 'Tienanmen Square': 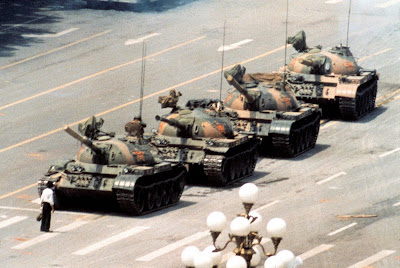 The more I thought about it the more I felt that this photograph summed up Picasso's 'War and Peace' drawing perfectly. So for my next piece I chose to try and represent this photo using the components from Jordan's painting; here's what I came up with: 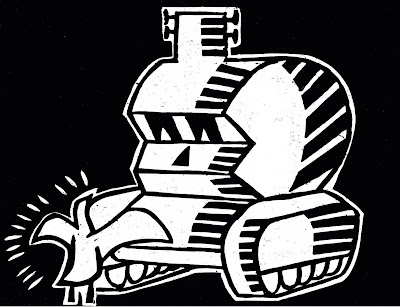 Overall I am happier with this piece that my first in this project; I felt more confident in creating it. I also feel that this is the first print I have made with a sense of depth; by that I mean that a recurring problem with my prints last year was that they continuously appeared 2D and as such were quite limiting in what they could express. Although I'm far from being completely happy with this print, at least it's a step in the right direction.

Email ThisBlogThis!Share to TwitterShare to FacebookShare to Pinterest
Labels: Work 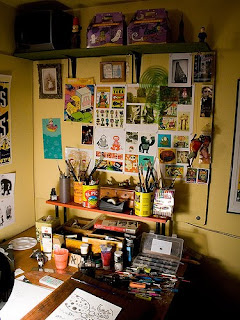 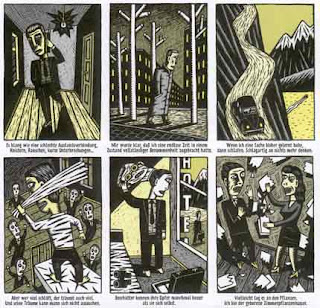 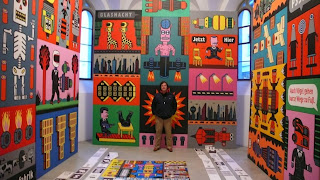 Your new work below made me think of the work of German illustrator Henning Wagenbreth (who I think we have spoken of before). His work is kind of graphic yet detailed. It has a distinctive narrative quality running through it - he works with comics also. It looks both grotesque but also has a very playful side to it. Like your work there is a stillness to it. like a captured moment. From the image showing his studio, his work is alot more hand-made than it looks.
Posted by Jo at 01:16 No comments:

Well, here it is my first interpretation of Picasso's 'War and Peace'. I'm quite pleased with it in comparison with some of the prints I made this year; but there are a few elements that I'm not completely happy with and I still think there is a lot of room for improvement. It did feel really good to get back into the process again though; it's been too long. I'm looking forward to seeing what Kris and Jord have done; so far I'm really liking this project. 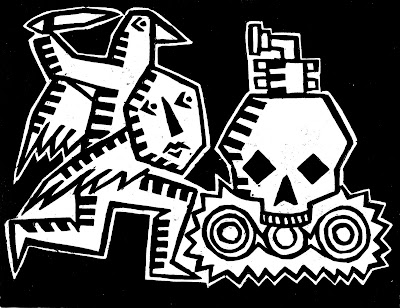 Email ThisBlogThis!Share to TwitterShare to FacebookShare to Pinterest
Labels: Work

So, today I've been working on my reinterpretation of 'War and Peace (1951)' by Picasso. I've been really enjoying it, it's good to have a project on the go again. The more I work on it the more I'm convinced that we picked a good piece to interpret: it has clear themes that can be interpreted in lots of different ways. It also has the feel of a sketch, a rough before a final piece; which suits this project perfectly- it's like we've been given an empty box of Quality Street and it's up to us to fill it with chocolates (hope that makes sense).
Anyway, I've been getting really into woodcuts over the past few months; particularly German Expressionist Woodcuts. Kathe Kollwitz is an artist that I really admire, I think she makes perfect use of the medium; using the blocks of solid black ink as darkness, and the the elements that she carves away as the light poking through. 'Darkness' is certainly the word to use when describing her work, it is incredibly disturbing and distressing. I find that her work is the kind that divides people; some people get it and really like it; some people find it too austere and depressing. Which is understandable, these pieces are about as dark as art can get; it's as if Kollwitz is testing us, to see how much we can take. How far do we dare stare into the abyss? To me though, these pieces are as beautiful as they are bleak; there is a truth and a sincerity to them which I think is always to be admired. 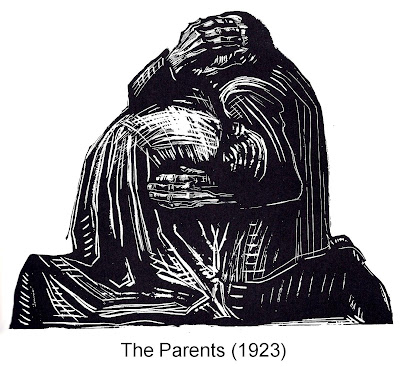 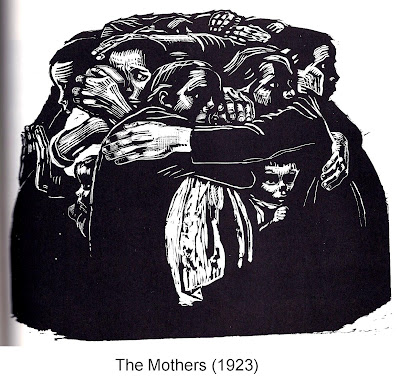 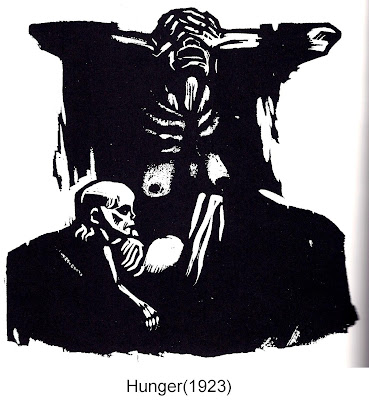